Minecraft on the Mind

i used some gift cards recently to pick up something fun, and it happened to be Minecraft for my PS3. i tried out the tutorial, and after dicking around with it, without really getting too deep, i started my world.

it's very cool, and have found some really cool things so far, but the experience got better when i introduced my two daughters into a new world where we work together.

more to come on this. this should be a fun experiment.

ancon 2014 has come and went. it was a weekend that was a blur at best, and not because of any alcohol or substances either. it was a non-stop series of events that were both memorable and amusing.

my daughter and i arrived on friday, and after collecting our badges and securing our room, we headed down to the floor and prepared to play the first event i was judging: Qags-in-a-bag: kaiju edition. (more to come about this later). Ian, a hexgames staffer and general good guy, only had one player for his event and i only had one player for mine, so we all joined together for my game.

saturday, i loafed around the convention in the early hours, met up with people as my daughter played clash of the kaiju, and bought some board games and card games in the dealer room. i went to my two o clock game, fallout in bikini bottom, but alas the game didn't go off. bummed about it because it was the thing i worked on more that anything else. my last event of the convention was Gozer vs Gojira, and it was surprisingly real good. ill tell more later.

back at it again and the deadline looms.

General Info: radiation has take it's toll on everyone and everything, but the cephalopods have contracted a radiation sickness that rots their flesh, turning them into withered husks. There are some perks to the sickness, but it's only a matter of time before the sickness wipes out the entire population.
Squid had joined forces with Puff, a teacher turned merchant, and together they manages the stronghold known as Bountifool. Things have gone allright, and you've managed to live a decent life, but there are rumors of the president and his cronies scouring the wastelands for something that will make everything better. There's a fabled formula out there that might be able to fix everything, even your sickness. You had better make sure you get in on this, and get that formula in your tentacles before anyone else.

General Info: You're a starfish with a keen eye for uses for useless junk. Ever since the fallout occurred, you've been scrounging the wastes for trinkets and treasures so that you can make a living. Not bad for a guy who spends most of the time under a rock.
Things haven't been too bad; you've scraped by here and there, and have even managed to make your rock house a mobile conveyance, one of the few left in the wastelands. Your business is getting better now that you're more mobile, but there is trouble brewing.
You've seen the strange eye-bots flying around, spewing out the stupid recordings of that Sheldon J Plankton fellow. He sounds important, and is talking about finding a legendary formula to help put things right again. You don't trust him, but the idea of getting your mitts on that formula doesn't sound too bad to you.
Posted by M.T.Kuszek at 8:55 PM No comments:

borrowing the idea from Dread, here are thirteen indispensable  questions that need answering when it comes to creating a kaiju. it's like giant monster mad libs.

Qags-in-a-Bag: The unpredictable, unbelievable, and improvisational game returns with a giant monster twist. Players will collaborate and complete a “Kaiju Questionnaire” which in turn will become a main feature of the game that will be played, even before the GM and players know the overall theme of the game. There no telling when and where this monster will pop up.
This game promises to be funny/obscene/disgusting/disturbing but always fun. Come play in the one event you don't want to miss.
Posted by M.T.Kuszek at 10:52 AM No comments: 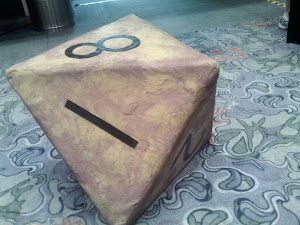